Making more out of the hand that life dealt them is key to the entrepreneurial heritage of the Davissons, whose family has been planted on American soil for more than 325 years. Ancestor Daniel D. Davisson served in the Revolutionary War, and his contributions to the fight for independence earned him 400 acres in West Virginia, a plot of land that has since become the heart and soul of Clarksburg. He owned a saloon near the Harrison County Courthouse and kept a livery where customers could leave their horses while they conducted business and/or drank.

Generations later, the Davissons remain committed to the area, which still boasts the Daniel Davisson DAR Cemetery. The family lives on farmland that’s been handed down across time, still producing beans and garlic with the same strains grown on the land in that earlier era.

The Davissons are a musical clan – a passion for the fiddle was handed down through the family, though Chris and Donnie’s grandfather broke with tradition when he picked up a guitar in the mid-20th century. Their father, Eddie Davisson, became a working musician with a band that included their uncle, Pete Davisson, churning out country, rock and blues while playing 200 days a year. And that musical legacy impacted Donnie and Chris, who carried on the family tradition with a fiery intensity.

The Davisson Brothers Band started out, of course, in Clarksburg, but began to widen its footprint, touring around the Atlantic Coast and the Southeast. They built a significant reputation in the live market, though they deliberately took their time with the recording studio, waiting 15 years before they finally made their first album. They made that decision, in part, because their own family tree had impressed upon them the concept of legacy. And a recording leaves a permanent record that they have to live with.

“We look at it like gettin’ a bad tattoo,” Chris says. “We’ve made sure we could be proud of what we did and put a lot of thought into the music and who we made it with, to make it on point like our live show is.” The band’s first album, the Davisson Brothers Band, is available from ChartTunes/Yell Records. 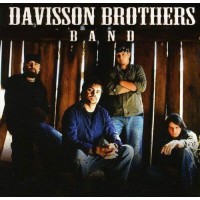